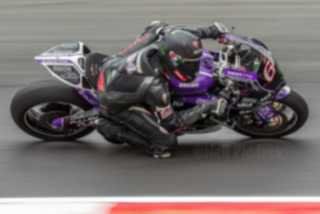 After the disappointment of Round 4 at Snetterton, Mike and the team were looking forward to getting back into the points at Round 5 of the Ducati TriOptions Cup at Brands Hatch GP.

Race 1 - Due to last years lack of laps at the famous Brands Hatch GP circuit, Mike and the team faced a big task of trying to setup the teams Ducati round the 2.5 mile circuit. The main aim was to beat last years lap times, and Mike managed this in the first practice session, indicating the basic setup of the bike was going the right direction. After qualifying in a satisfactory 17th, Mike and the team made a couple of setup changed to try and bridge the gap to the top 15 and try and earn some Championship points. After a good start, it was clear to see that the teams gearing gamble didn’t really pay off, and Mike struggled to maintain the required race pace for a points scoring finish. Mike crossed the line in P16, just missing out on a points scoring finish. Race 2 - After Saturdays frustrating Race 1, the team made some more setup changes, again in a bid to bridge the gap to the top riders in the final race of the weekend. Mike made another good start, and immediately felt the positive changes that had been made to the bike overnight. This allowed Mike to push hard, and gained much confidence throughout the race, meaning the lap times tumbled rapidly. Mike crossed the line in a very respectable 12th position, and well within the points for the first time at Brands Hatch GP. The pace Mike showed in the last 4 laps would’ve been good enough to place him well within the top 10, but once again, a difficult starting position made it difficult to progress through this extremely tough class. While also racing in the Ducati TriOptions Cup, Team MTR Ducati were able to enter a local club meeting at Mallory Park racing in the EMRA Club Championship. Although the weather was extremely unkind, Mike competed in 6 races throughout the day, and grabbed 2 x wins, 2 x 3rd place, a 4th and 6th place finishes. Although these races are purely used as valuable track time, its always nice to be back at the front and competing for wins against some very competent riders.  After an extremely positive outing at both Brands Hatch GP and the EMRA Mallory Park meeting, both Mike and the team feel as though they have made big progress with the bike setup, and are really looking forward to getting out on track for Round 6 of the TriOptions Cup. Although the race results seem a little frustrating, it’s clear to see that the team are consistently improving over a race weekend. After comparing results from the Brands Hatch GP race meeting in 2017, Mikes lap times were over 3.5 seconds faster in 2018, showing the huge progress made in just 12 months. TeamMTR Ducati Oxford’s next race meeting is at Cadwell Park, on 17-19th August for Round 6 of the Ducati TriOptions Cup, closely followed by the following Round of the EMRA Championship once again at Mallory Park.

As always, ABSSAC wishes Mike and the team the best of luck at the next race.