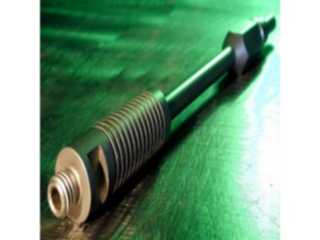 Abssac recently enhanced the operation of a medical orthodontic machine by replacing a universal joint, plastic shaft coupling and a piece of shafting with just a one piece helical beam drive shaft unit.

Abssac’s customer had initially been using a traditional universal joint to connect a hand control, via a piece of shaft and through another plastic flexible shaft coupling, to a small gear box. The universal joint was expensive and was being utilized at the limit of its angular capability, which was causing cyclic torque variants on operation. A separate piece of bar stock was then used to span the drive mechanism to the gear box, which again required 3 degree shaft misalignment, which was accommodated by a small plastic multipart shaft coupling. The old design was inefficient, time consuming to build and had suffered from reliability issues.

Abssac’s solution was to take a 400mm long piece of Aluminium bar stock, 15mm in diameter, to give the length requirement of the drive shaft. Then using the unique ability to adapt the “flexure” or beam part of the helical beam shaft coupling, they could provide the two angular misalignments required in the system, but all within the single part.

Utilizing a double start coil flexure at each end to give the superior torsional stiffness, the drive shaft could accept angular misalignment up to 30 degrees at one end, whilst the other end would accept up to 5 degrees. The final design incorporated a split clamp design to lock the drive shaft into position onto the driven and drive ends.

The new design was then used in 4 other machines using different lengths as the single part provided a zeroblacklash drive solution, which did not require lubrication, maintenance or suffered from operational issues.