So why use machined Compression or Extension springs? Machined springs can provide very precise, linear deflection rates because virtually all-residual stresses are eliminated. As a result, there are no internal stresses to overcome before deflection occurs, which can be the case in the wire wound spring. Uniquely we can offer multiple start spring coil configurations. The most common configuration is the single start spring, which consists of a single continuous coil element, which starts at one end and terminates at the other end, much like its wire wound counterpart.

So why use machined Compression or Extension springs? Machined springs can provide very precise, linear deflection rates because virtually all-residual stresses are eliminated. As a result, there are no internal stresses to overcome before deflection occurs, which can be the case in the wire wound spring. Uniquely we can offer multiple start spring coil configurations. The most common configuration is the single start spring, which consists of a single continuous coil element, which starts at one end and terminates at the other end, much like its wire wound counterpart. In all multi start compression or extension springs they have intertwined continuous coil elements, still within the same single part construction. In effect, this puts multiple independent helix's in the same cylindrical plane, which provides totally enhanced spring performance. With the machined spring, perpendicularity, parallelism, lateral bending, axial and torsional rates can be guaranteed. Normal rate accuracy is +/-10% but rates <1% are usually possible.

Multi-start springs have many advantages. When applied to compression and extension springs, a single start spring provides a reaction force plus a moment. On multiple start flexures, all internal moments are resolved within the spring itself, which translates into excellent compression or extension parallelism. Multiple start spring configurations also significantly unify the lateral bending and lateral translation forces and moments around the springs circumference given a lateral deflection.

Double and triple start variants make the loading points irrelevant on the radius of the spring but increase the accuracy of parallelism. Multiple starts as high as five have been employed to unify the lateral reaction forces of machined springs. Another advantage of multiple start spring elements is that they not only provide redundant elastic elements should a failure occur, but a failed element (coil) will be physically trapped by the remaining one and in many cases will allow the albeit reduced function of the spring design to still operate.

Once the performance aspects of the spring are calculated and agreed, we can then look at the method of attachment. In many cases the machined spring incorporates other parts of the working mechanism into the single part, such as flanges, gears, splines etc, making the final item more reliable. The choice of end attachment is really up to your imagination !

Machined Compression/Extension Springs. We like to think of it as.....Precision Elasticity... 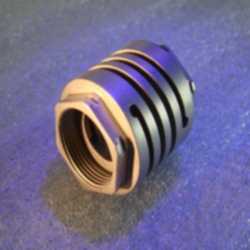 Recently at a customer, a question was asked, “Would Abssac be able to retro-fit a spring now being used as a buffer spring in a fuel control system”? The spring unit should compress and extend 2mm but deliver an accurate spring rate over a set life time. The current wire wound spring was not providing an accurate spring rate over time and each spring had to be rate tested and certified before fitting. Normal rate accuracies were ranging from +/-15% and were not linear in rate. As the name suggests, the machined spring is machined from a single piece of material. This not only allows one, two, three or more spring elements to be machined into the single part but due to the geometry of the coil, the spring rate is totally linear.  In fact spring rate tolerance can be as good as +/- 1% if required with the machined spring.

After the preliminary discussion between the customer and our application engineer, a drawing of the concept spring was forwarded to be reviewed. A few minor changes were then needed, as the customer engineer looked into incorporating attachment designs into the single piece stainless steel spring. All other dynamic parameters could be improved on over the wire wound spring being used and a final configuration was then proposed. 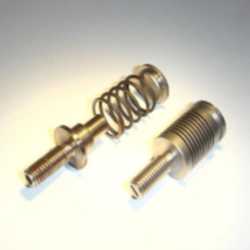 Abssac has recently aided the design and reliability of a compression spring control mechanism that originally involved the amalgamation of four separate machined parts. Those being a wound compression spring, a machined spring seat, which incorporated a captivated ball bearing and finally a machined top hat attachment complete with a M5 locating thread.  An additional issue with the original design was that the customer had to batch test the wound springs before assembly for dimensional accuracy and performance.   All of these parts were sourced from separate suppliers and then assembled at the customer’s factory.

Utilising the unique properties of the machined spring, Abssac was able to supply a ready to fit part machined from a single piece of material, that not only incorporated all of these design requirements but also ensured that the actual compression spring rate would be accurately supplied in each part, time and time again,. The new abssac part immediately eliminated this batch control process and as a direct result of the machined springs efficiency of operation there was  a marked percentage efficiency increase within the control mechanism.

Uniquely, Abssac incorporated a  double start machined compression spring set up into the design. The part had to endure a very high temperature of up to 350C and compress up to 10mm from its free state. Realising the potential of  tighter parallel and perpendicularity tolerances the product could offer, Abssac’s customer then requested even tighter performance parameters which would ultimately enhance the total products performance. 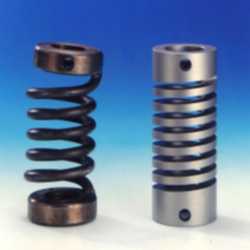 Images show before (wound) and after springs (machined) - This application was for a constant force compression spring to connect two pipeline "PIGS" together. (A pipeline pig is a machine that enters into the actual pipeline from an offshore oil rig supplying oil or gas to the mainland.) As the pig moves along with the flow of oil or gas, the pig records data, such as the condition and reliability of the pipe wall. Originally, a traditional wire wound spring was used for this connection, but the long term compression forces caused performance deterioration. The readings from the PIGS were becoming more and more unreliable as pulsing shockwaves in the pipeline hit the PIGS along their journey. The spring also needed guaranteed flat end surfaces and the piano wire material was corroding in the hostile atmosphere. Reliability of the wound spring was poor.

The customer gave ABSSAC the overall dimensions, as these parameters were finite. Next the desired axial spring rate was supplied.  Using Finite element analysis, Abssac could tune the geometry of the machined spring to guarantee the desired spring rate, but also look at the resonant frequency of the spring system to try and counteract the pulsing shockwaves Abssac supplied a machined spring with guaranteed flat end surfaces as well as precision tolerances on the overall length, outside and inside diameter. An exact compression spring was supplied in a material that gave much better resistance to the corrosive atmosphere. Our customer reported "PIG" reading accuracy had increased by 50% using the machined spring product.