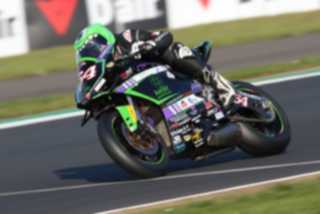 TeamMTR enter their third season of the prestigious Ducati TriOptions Cup, after finishing 13th overall in the 2018 campaign.

With Round One of the Ducati TriOptions Cup taking place at Silverstone over the recent Bank Holiday weekend, Mike and the team headed there looking to start their season well, and get some decent Championship points on the board.

Race 1 - After qualifying in P12 for race one, Mike and the team were looking to break into the top 10 of the strong 35 rider field. A poor start saw Mike drop down to P21 on the first lap. After navigating his way up to P11, Mike encountered a small gear shift problem with 3 laps to go, forcing him to drop back down to P13, where he finished the race.

Race 2 - After the result from Race 1, Mike started Race 2 again in P12, and both himself and the team were keen to get a better start and make some places up to challenge for the Top 10. Mike got off the line better than Race 1, but unfortunately still lost some places on Lap 1. Once again, the lap times were consistent, and this allowed Mike to move up the field and finish Race 2 in P11, and just outside the Top 10.

In all a frustrating weekend was had by the team. Mikes lap times were consistent throughout both races, and actually faster than the 2-3 riders that finished ahead of him. But due to the engine failure the team had during Pre-Season testing, and only having the bike rebuilt 4 days before Silverstone, it was a relief for Mike and the team to be able to attend the race meeting at all, as it was touch and go whether the bike would be ready in time for Round 1.This in turn also affected Mikes performance, as it was clear to see he was apprehensive while on track, having not ridden at race pace for over 7 months. This is something Mike will be working on between now and Round 2 at Oulton Park in less than two weeks. Round two of the Ducati TriOptions Cup takes place on 4/5/6 May at Oulton Park, Cheshire.

As always, ABSSAC wishes Mike and the team the best of luck at the next race.