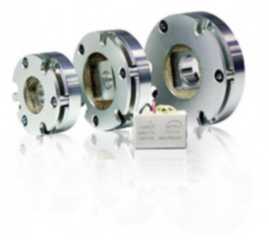 Now available through ABSSAC, the brand new BXR-LE type super slim safety brake has an impressive, space saving, physical size. The spring actuated brake model is half the thickness, but the same outer diameter, as its big brother type BXW series. It is operated by the compressive force delivered from several built in springs which are activated in the event of a power failure or if the power is cut off due to an emergency. The new model features holding and braking torque just under the existing models, the overall thickness can be as little as 14.0mm in model 035. Through magnetic field analysis and using the latest FEM techniques, the brake has been enabled to have an optimal physical design. Operational costs can also be lowered by using the BXR-LE series. With all safety brakes, when a machine is running, the brake is continuously consuming electrical current, in order to maintain the brake in a released condition. However, the necessary electrical energy consumed when the brake starts to release differs greatly from the current draw requirement when the brake is held in the released condition. By optimising this differential with an over excitation power supply, the operational energy saving can be up to 90%. Ideal applications for the BXR-LE brake are in the integrated placement within servo motors and robotics where space saving attributes are maximised.