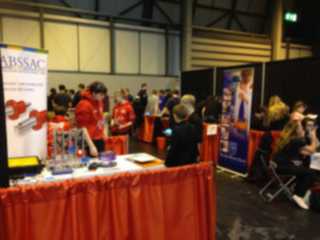 Continuing with our sponsorship and following the qualification of team 5638X – The De Montfort School (TDMS) Robotics Titan, it was time for the National Finals, being run in conjunction with the Big Bang Fair at the National Exhibition Centre (NEC), with places at the World Finals in Louisville, Kentucky in the U.S.A up for grabs!

Team 5638 - TDMS Tolerance were also awarded a place at the U.K. Nationals following a request to the VEX organisers. 40 Teams were in attendance, from all over the U.K.  A very busy 2 days of competition was in store for the competitors, 140 qualification rounds, followed by Knockout rounds to determine the Champions. A huge congratulations to all that took part in the event that was a massive success.

Team 5638 – TDMS Tolerance ended their qualification in 17th Place with 7 wins, 6 losses and 1 draw. Team 5638X – TDMS Titan finished 26th after 5 wins and 9 losses.  With so many teams at the event, alliances were formed with 3 teams for the knockout stages compete in a best of 3 format.  Each team had to compete at least once in each alliance during the round. Team 5638 - TDMS Tolerance were chosen in the 5th alliance with Team 6493 Tanfield and Team 1591A – Team H. Unfortunately after a closely fought quarter final the 5th ranked alliance was knocked out 2-0 (QFR1 44-38, QFR2 39-30).  Team 5638X – TDMS Titan, were not chosen in an alliance and bowed out of the competition at this stage.

Full results can be found at: http://www.robotevents.com/robot-competitions/vex-robotics-competition/re-vrc-15-1547.html#tabs-results

We would like to wish all of the U.K. team going to the World finals all the best!